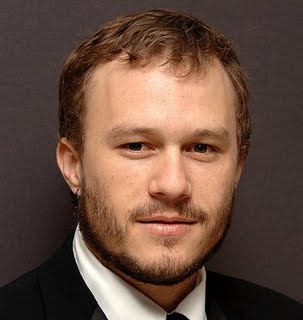 "You wanna know how I got this Oscar?"
"I never took an acting class, so I've made all my mistakes on film."
Advertisement:

At the outset of his career, Ledger was cast in several roles as a handsome young heartthrob. Eventually, he broke out as a well-respected actor, particularly for his performances as Ennis del Mar in Brokeback Mountain and The Joker in the Batman Begins sequel The Dark Knight.

He was a method actor who really got into the heads of his characters; in an interview with Empire Magazine on his role as the Joker he revealed: "I sat around in a hotel room in London for about a month, locked myself away, formed a little diary and experimented with voices ... it was important to try to find a somewhat iconic voice and laugh. I ended up landing more in the realm of a psychopath ... someone with very little to no conscience towards his acts." He also said that director Christopher Nolan gave him absolute freedom with his interpretation of the character. Despite his methods, Ledger was never really twisted by this role; during filming of The Dark Knight, he could be seen skateboarding, and having regular conversations with cast and crew in his Joker ensemble. Needless to say, Ledger was considered very friendly, and The Dark Knight co-stars such as Christian Bale had nothing but nice things to say about him.

Interestingly, prior to The Dark Knight, Ledger and Bale were also two of the actors who, alongside others, portrayed different public personas of Bob Dylan in the biopic/musical I'm Not There.

Unfortunately, Ledger developed insomnia during and after the completion of his roles in I'm Not There and The Dark Knight. He used various sleeping pills to try to curb the insomnia, but when that didn't work, he combined different pills together, which sadly resulted in his death on January 22, 2008. He was only 28 at the time of his death, and completed only half of his work as the character Tony in The Imaginarium of Doctor Parnassus.

Ledger's death threw the production of Parnassus into chaos, as his participation was one of the selling points to getting financial backing for the film. In order to compensate for Ledger's death, Tony would also be portrayed by Johnny Depp, Jude Law, and Colin Farrell, playing the character one at a time as he changes appearance during his bizarre, fantastical journey. All three of Ledger's replacements donated their salaries to Matilda Ledger, Ledger's young daughter with actress Michelle Williams.

On July 18, 2008, The Dark Knight was released to rave reviews and became one of the highest grossing movies in the US box office, raking in half a billion dollars. Ledger's terrifying—and at times funny—portrayal of the Joker was widely praised, and Oscar buzz was abound.

This performance would win Ledger a lot of posthumous awards, including the Oscar for Best Supporting Actor (which was presented to Ledger's family); prior to that, he was also nominated (although he didn't win) to the Academy Award for Best Actor thanks to his performance in Brokeback Mountain.

He also dabbled in directing music videos, however, his only major video, an animated one for the song "King Rat" by indie rock band Modest Mouse, was not released until a year and a half after his death. His hip-hop video for "Cause and Effect"

by rapper N'fa was also not released until after his death.

Due to the circumstances of his death and the films he had at various stages of development at the time, he is the first actor to be eligible for an Oscar in each three consecutive ceremonies after his death. (I'm Not There in 2008, The Dark Knight in 2009, and The Imaginarium of Doctor Parnassus in 2010)

Tropes invoked by this actor's works: