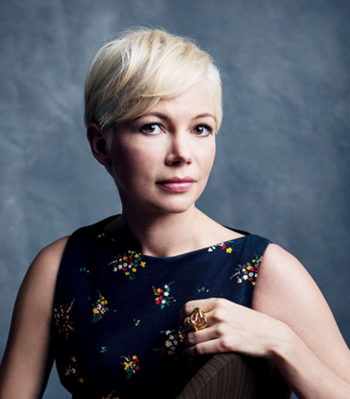 Michelle Ingrid Williams (born September 9, 1980 in Kalispell, Montana) is an American actress who first rose to fame in the late '90s playing bad girl Jen Lindley on the hit series Dawson's Creek. After the show ended, she jumped to the silver screen with roles in such films as Dick, Prozac Nation, and The Station Agent, and also gained critical acclaim for several independent films before taking the role that would establish her as an A-list talent, the long-suffering Alma Beers in 2005's Brokeback Mountain.

On the set of Brokeback Mountain, she met and began dating Australian actor Heath Ledger, and a year later Williams gave birth to a daughter, Matilda Rose Ledger. The couple stayed together until 2007, separating amicably. After Ledger's death in 2008, Williams withdrew from public life for a time, but did have a starring role in the poorly-received Swedish film Mammoth.

In 2010, Williams returned to the screen with a critically acclaimed lead role in the romantic drama Blue Valentine, and also appeared in the Leonardo DiCaprio thriller Shutter Island. 2011 saw her take the title role of Marilyn Monroe in My Week with Marilyn, and her performance drew extensive praise and award nominations. In 2013 she played the good witch Glinda in Sam Raimi's Oz the Great and Powerful opposite James Franco and Mila Kunis.

In 2019 she played actor and dancer Gwen Verdon in the miniseries Fosse/Verdon. The following year she married Fosse/Verdon director Thomas Kail, with whom she had another child.

Not to be confused with the singer Michelle Williams of Destiny's Child.