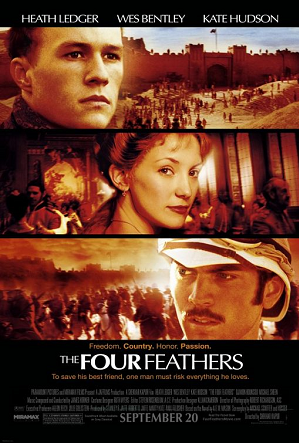 The Four Feathers is a 2002 film directed by Shekhar Kapur, starring Heath Ledger, the latest of several based on the 1902 novel of the same name by A.E.W. Mason.

The film is set in 1880s Britain and the Sudan during the Mahdist Revolt. After resigning from the British Army the week they were to ship out to fight the Mahdi in the Sudan, Harry Faversham (Ledger) receives four feathersnote a symbol of cowardice at the time from his friends and his fiancée. Shaken by guilt, he decides to redeem himself by going to the Sudan alone and find his friends.