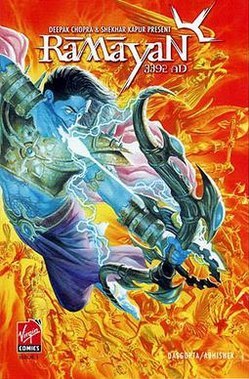 Ramayan 3392 AD is an Indian comic book series created by Deepak Chopra and Shekhar Kapur, and originally published by Virgin Comics (it has since moved to Graphic India.) It is an epic based on the Ramayana.

In a distant future, after a nuclear war has drastically reshaped Earth and its inhabitants, the evil Ravan is making inroads on Aryavarta, the last bastion of free civilization. The only people who can stop him are the noble princes Rama and Lakshman and Seeta, who may be the messiah. Unfortunately, Rama has been exiled by his corrupt court, and Seeta has only recently come of age.