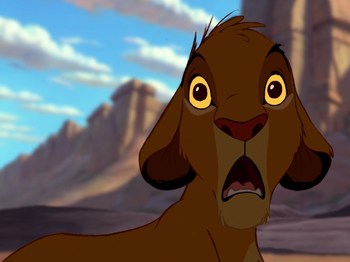 And Simba gets an ever bigger one because of what happens next...
"It's that moment of dawning comprehension I live for."
— Hobbes, Calvin and Hobbes
Advertisement:

The moment at which a character realizes that something really, REALLY bad is about to happen. Either that, or it already has and they are in big trouble because of it. They may not always say anything in particular when they do, but even if they don't, the look on their face clearly conveys to the audience their realization. This moment often features stronger language, and is when they truly realize that things are about to royally hit the fan. Sometimes the first few notes of Fryderyk Chopin's Funeral March

are used as background music to highlight how grim the situation is.

Sometimes, even the audience can have this moment when they realise just how bad a situation is for a character and the character hasn't yet realised.

There are lots of ways to react to moments like this. Characters may often exclaim stuff along the lines of "You Have GOT to Be Kidding Me!", "I Want My Mommy!" or sometimes even "This Cannot Be!". Other characters might emit a Loud Gulp instead. A few might say their Catchphrase but in an uncertain voice. Some might even freeze in fear completely. On the other hand, other characters few others may react more with despair rather than full-on fear. A few others may look to their equipment for a solution. And finally, for some, it is the crowning moment of despair.

The effectiveness of this moment can be affected by the difference between their usual competence and confidence levels and how completely they are boned. Characters with low self-esteem or who are constantly crying out in terror are difficult (but not impossible) to make this trope work with, and may react more along the lines of This Is Gonna Suck. But that arrogant, so far unbeatable supervillain suddenly realizing they're about to have his or her ass royally kicked? Now we're talking!

Can occur if one protagonist has been luring the other one into a trap, or if they just have some shiny new skill. Or they may simply be a lower-level villain who's just had the very bad luck to be confronted with a hero impossibly out of his or her league and is about to be on the wrong end of a Curb-Stomp Battle.

On occasion, they will be discussing the situation when they realize either the full import of it, or worse, that it's about to happen to them. Can also occur if a character speaks ill of another in a language they think the latter won't understand, only to find out, much to their horror, that the latter also speaks it.

This is the polar opposite of Obi-Wan Moment, when despite the bad situation someone still manages to look composed. May result in a Heroic BSoD for a heroic character, or even a Villainous Breakdown for a villainous character. Nine times out of ten, this will immediately follow "What does this button do?". The remaining tenth follow some other temptation of fate. Also a very common reaction when a villain, normally The Chessmaster, Villain with Good Publicity, or Manipulative Bastard, realizes they've just been the victim of an Engineered Public Confession.

When this trope becomes literal, that's Bring My Brown Pants—as Bill Cosby once said, "first you say it, then you do it!"

When most of the cast available in the scene does this expression, it's a Mass "Oh, Crap!" moment. If someone tries to explain the situation to someone else, and realizes half-way through their own explanation they're in real trouble, it's Explain, Explain... Oh, Crap!. If the person making the realization doesn't try to explain and says nothing but "Run," it's time to Run or Die. If you realize you're in trouble after your explanation, or if someone tells you something really bad is about to happen and "Oh, Crap!" isn’t your first reaction, it's a Delayed "Oh, Crap!". When you try to save some face by putting on a happy face, you make an "Oh, Crap!" Smile. When you pretend to realize you are in trouble only to mess with your opponent, it's an "Oh, Crap!" Fakeout. When your primary reaction is resigned acceptance of the situation, it's This Is Gonna Suck.

See also Wide Eyes and Shrunken Irises. Say Your Prayers may be involved as part of this reaction.

open/close all folders
Comedy
Master: Have you learned nothing from the lesson of Ed Gruberman?
Student: Yes Master, I have learned two things. First, that anger is a weapon only to one's opponent.
Master: Very good.
Student: And secondly — get in the first shot. Boot to the head! [whoosh]
Master: You missed.
Student: Um.. yeah.
Comic Strips
Myths & Religion
Pinball
Podcasts
Tabletop Games
Toys
Visual Novels
Feedback