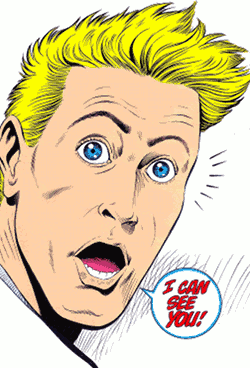 A specialized form of Breaking the Fourth Wall. Fictional characters suddenly come to the realization that they are fictional characters living in a work of fiction. As you can imagine, this is often a terrible shock. How would you take it if you suddenly learned that you, your family, your friends, and your entire universe are all fake, and that everything you've ever said, done or thought was the product of someone else's imagination? Thus, characters who experience this trope seldom take it well. Popular in comic books and among writers who want to wax philosophical.

Not to be confused with "Truman Show" Plot, in which the characters are real, but the world is fabricated.

This is often used as The Reveal, so beware of spoilers.