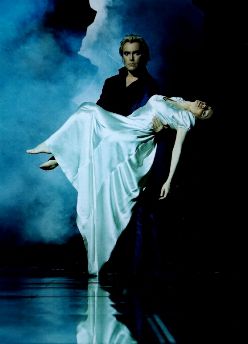 Everyone has danced with Death
but no one like Elisabeth!
Advertisement:

Elisabeth is a German-language musical about Elisabeth (also known as Sisi), the wife of Habsburg Emperor Franz Joseph I, focusing mainly on an imagined lifelong flirtation with Death himself (rendered as a handsome young man called "Der Tod" — German for "death") and Elisabeth's constant need for independence, often at the cost of her unconditionally loving husband and her hypersensitive son Crown Prince Rudolf. It is narrated from beyond the grave by Luigi Lucheni, the Italian anarchist who assassinated her in 1898. He does his best to turn the audience against her, but ultimately it is left to the viewer to decide about Elisabeth's character.

It premiered in Vienna in 1992 and was responsible for launching the careers of Pia Douwes (Elisabeth) and Uwe Kröger (Death), who are today two of the most important performers in European musical theater. Elisabeth is also a popular offering by Japan's all-female Takarazuka Revue; actress Maki Ichiro, who played Death while a Takarasienne, went on to play Elisabeth herself in a mixed-gender production after leaving the Revue, and Jun Sena has gone from Lucheni to Elisabeth to Death (all Takarazuka) to Elisabeth again in a mixed-gender production. Also, Hikaru Asami played Rudolf in the 1998 (Takarazuka) production and then went on to play Elisabeth in the 2008 mixed-gender production, and having alternated the role with Jun Sena. Various productions often reinterpret the show, including new songs and adding or removing whole plotlines, depending on how familiar an audience is with the historical background.