Theatre / Always Plenty of Light at the Starlight All Night Diner 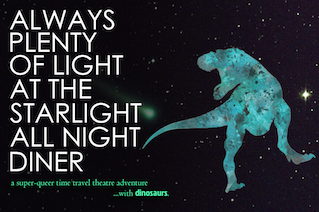 Always Plenty of Light at the Starlight All Night Diner is a play by Darcy Parker Bruce.

The play is a SUPER queer time travel adventure space play with dinosaurs and lots of kissing.