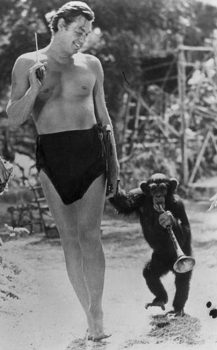 "The director sent for me for Tarzan. I climbed the tree and walked out on a limb. The next day I was told I was an actor."
Advertisement:

Johnny Weissmuller (born Johann Peter Weißmüller; June 2, 1904 – January 20, 1984) was an Austrian-Hungarian swimmer who was regarded as one of the fastest swimmers in the 1920s.

He won five Olympic medals and one bronze one for water polo at the Olympic Games of 1924 and 1928. During the 1930s he became world famous as Tarzan in the eponymous film series. Despite being the sixth actor to perform the role on screen and having several other actors play the part in the decades after that, he is still considered the most iconic Tarzan actor of all time. He played the character in 12 films and also invented the world famous Tarzan yell, which is still used to provide a Shout-Out to him when performing a Vine Swing.