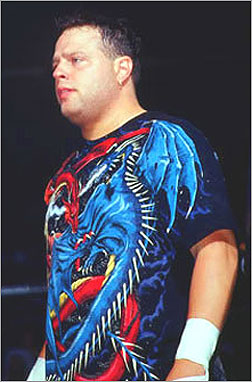 John Michael Watson (born June 4, 1973) is a semi-retired American Professional Wrestler and trainer from Buffalo, NY best known for his work in ECW as Mikey Whipwreck. He started his career in 1994 as part of the ring crew before being noticed by Paul Heyman. Due to his small stature (5'9, 187 lbs.), he looked like someone who would never make it, and, according to Mick Foley's autobiography Have a Nice Day, his trainer, Sonny Blaze, trained him for free because he thought he would never make it. Paul named him "Mikey Whipwreck" and gave him an Underdog gimmick/character, with Mikey getting clobbered in his first several matches. To everyone's shock, he defeated Pitbull #1 for his first of two NWA ECW Television/ECW World Television Titles

. Whereas most wrestlers would sound confident on the mic, especially after having won their first title, Mikey came off as terrified. He would go on to replace Terry Funk as Cactus Jack's tag team partner on August 27th when they defeated the Public Enemy for the NWA ECW Tag Team Titles

, which would shortly after be renamed the ECW World Tag Team Titles, as that was the same night that Shane Douglas won the NWA World Heavyweight Title

. Mikey would eventually go on to defeat the Sandman for the ECW World Heavyweight Title in October 1995, 2 Cold Scorpio for the TV AND Tag Team Titles in December at ECW Holiday Hell and he and Yoshihiro Tajiri would hold the ECW World Tag Team Titles for one day in August 2000. He also had a brief run in WCW in mid-1999 and would go on to compete for several independent promotions primarily in the Northeast/New England area. While in ECW, he and Taz were the main trainers at ECW's House of Hardcore wrestling school. Post-ECW, among the wrestlers he helped train were Zack Ryder, Jay Lethal, and the Spanish Announce Team (Jose and Joel Maximo and the Amazing Red.) In 1994 he won the Wrestling Observer Newsletter's "Rookie of the Year" Award.