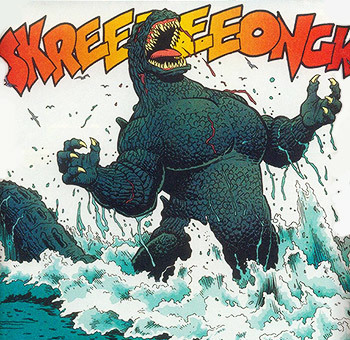 While many characters have a Catchphrase, it's difficult for a monster, animal, or other kind of non-intelligible creature to have one. As such, they'll often have a recurring noise they make that serves as their calling card: a signature roar.

This is not just a roar that a monster happens to make; it is unique to that creature, or in the very least hearing it will instantly remind one of it, thus making it Recognizable by Sound.

A Signature Roar is usually followed by beating. Compare Hell Is That Noise, Signature Sound Effect and Mighty Roar. When the signature roar comes out of an obviously different creature as a comedic Shout-Out to the original monster, see Silly Animal Sound.

Tarzan lets out his famous yell after defeating Sabor.

Tarzan lets out his famous yell after defeating Sabor.