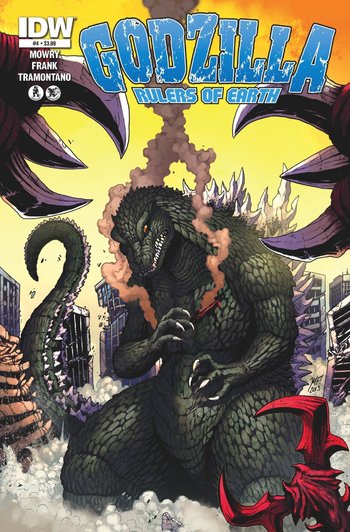 The fifth of IDW Publishing' series to feature Godzilla, and the third set in the shared universe that includes Kingdom of Monsters and Godzilla: Ongoing, Godzilla: Rulers of Earth picks up shortly after Godzilla: Ongoing left off, as the reemergence of Godzilla coincides with a plot by the aliens from Ongoing—now revealed to be the shapeshifting Cryog and the aquatic Devonians—to seize control of the planet.

Unlike Kingdom of Monsters, which attempted to mix political satire with giant monster action and Ongoing, which attempted to do an A-Team-esque story, Rulers of Earth aims to be a straight up comic book in the superhero vein, succeeding admirably. In addition to IDW series mainstays like Godzilla, Mothra, Rodan, and Gigan, the series also introduces a number of other Toho monsters, including Orga, Destoroyah, and Manda, and even obscure creatures like Sanda, Gaira, and Gezora. Even unpopular characters like Zilla and Jet Jaguar appear, re-imagined and improved upon. Human characters like series regular Steven Woods are also given a fair amount of screentime, though their roles are downplayed when compared to those of the monsters.

The twelve-issue series received positive reviews, and a follow-up is in progress. It concluded with a double sized 25th issue.

Tropes appearing in this comic include: