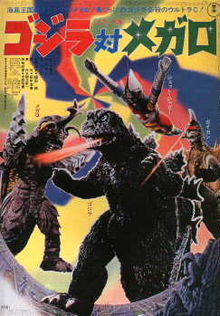 "This is the film most baby boomers saw in U.S. movie theaters and on TV. Fans had to rely on badly cropped VHS and DVD bootleg copies to enjoy the film thereafter."
— Section of blurb from the back of the first U.S. DVD release, showing the long run of No Export for You this film suffered from
Advertisement:

Godzilla vs. Megalon (Gojira tai Megaro) was the 13th entry in the Godzilla series. It was the first film in the series to have someone other than veteran suit performer Haruo Nakajima in the role of Big G, with Shinji Takagi taking over the rubber suit. Interestingly enough, this wasn't going to be a Godzilla film. To cash in on the Kyodai Hero craze, Toho held a contest in 1972 to make a tokusatsu hero that would appear in its own film. The winning entry was from an elementary student, who called his creation "Red Arone". Toho changed the name to Jet Jaguar, and he was set to star in Jet Jaguar vs. Megalon, but, unfortunately, was found not to be able to carry the film. Tomoyuki Tanaka suggested adding Godzilla and Gigan into the film. In order to make up for the lost time, the film was shot in three weeks and, all in all, production time lasted six months. The film bombed at the Japanese box office, and Jet Jaguar didn't get the intended series.

For everything its predecessor did wrong, Godzilla vs. Megalon did it that much worse. Stock footage abounded, the special effects were dodgy at their zenith, and much of the plot was contrived. Nevertheless, the film was the subject of a heavy marketing push, and saw decent theatrical success in the United States, where it was released to cash in on the success of King Kong (1976). As for the newcomers, Megalon and Jet Jaguar were received well by fans outside Japan, and a series of video games helped introduce the two to a new generation of fans and cement the positive opinion of them among those more familiar with the franchise.

The plot centers around the conflict between an opulent undersea civilization known as Seatopia, host to large underwater and underground cities and people who resemble the cultures of Ancient Greece and Rome. Nuclear testing resulting in damaging earthquakes have severely impacted their people, and as revenge against the surface, they plot to unleash the wrath of their god, Megalon. The Seatopians set up a base by drying out a lake where our ostensible human protagonists, an "inventor" named Goro Ibuki, Goro's younger brother Rokuro and their friend Hiroshi Jinkawa, are trying to relax. They don't take it well.

The Seatopians attempt to steal Jet Jaguar, a prototype robot, from the inventors. The first attempt, while the robot is still incomplete, is less than successful, but the second time sees them capture not only the robot but the three humans. The brothers are sent to be offed, while Jet Jaguar is turned against Japan and used to direct Megalon towards Tokyo.

The heroes escape from the clutches of the Seatopians, and after meeting up with the always hapless JSDF, manage to regain control of Jet Jaguar and decide to call in Godzilla to combat Megalon.

With the guidance of Jet Jaguar removed, Megalon is reduced to flailing around and stomping on a few redshirts. Upon learning of Jet Jaguar's recapture, the Seatopians send out a distress call to the Nebula M aliens, requesting Gigan's assistance, which is no way an excuse to rely overly on stock footage, no sir.

Jet Jaguar grows to Kaiju size and teams up with Godzilla to fight Megalon and Gigan. Much silliness ensues, including the awe-inspiring tail-slide dropkick from Godzilla to Megalon. Eventually, the two villains are repelled and Godzilla shares a victory handshake with Jet Jaguar, who shrinks back down to rejoin his creators. Godzilla, meanwhile, returns to Monster Island, ready for the next adventure...

Followed by Zone Fighter, then Godzilla vs. Mechagodzilla.

Godzilla vs. Megalon provides examples of the following tropes: