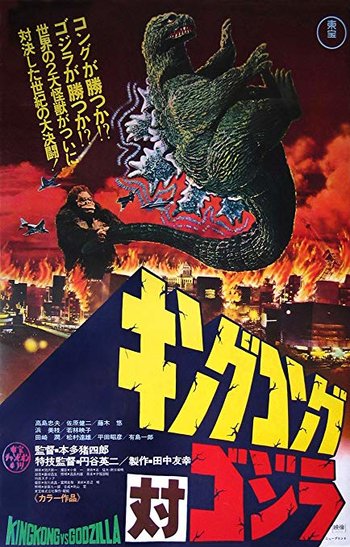 This can't end well...
"But nothing, nobody can stop the great showdown, when King Kong and Godzilla meet, to fight for survival of the fittest!"
— Universal-International's trailer for the film.
Advertisement:

The third entry of the Showa Godzilla series. After going on to helm numerous science fiction and kaiju films in the intervening years after the original movie, King Kong vs. Godzilla is the second film to be directed by Ishir⁠ō Honda. Known in Japan as Kingu Kongu Tai Gojira.

King Kong vs. Godzilla, is notable for many things. First, it was the first movie to feature both King Kong and Godzilla in color and widescreen. Second, and this is really important, it had both King Kong and Godzilla sharing the screen at the same time. Thirdly, because of how much things had changed in the studio production-wise in the seven years after Godzilla Raids Again, it can be considered somewhat of a "soft reboot" to the franchise as a whole.

Seven years after Godzilla's defeat, Mr. Tako, a television executive bored of a science program show with very low ratings, decides he wants to raise his ratings when he discovers a creature known as King Kong living on a charted island known as Faro Island, and so enlists TTV to find and capture the creature in order to do so. However, outside of the former Kamiko Island, a nuclear submarine is set to investigate an iceberg with high radiation. To the horror to many, the iceberg contains the radioactive creature Godzilla. With two monsters on the loose, Japan decides King Kong should be the one to defeat Godzilla, but which of these monsters will emerge victorious?

Originally released in 1962, Toho's 30th anniversary, King Kong vs. Godzilla was the most commercially successful film in the franchise until the release of Shin Godzilla in 2016. The Japanese version of the film had a satirical tone, while the American version excised it in favor of a more conventional approach. The biggest difference between the two versions of the movie is the removal of most of Akira Ifukube's score, which is usually regarded today as one of the maestro's greatest works ever. The only pieces of music to survive this alternate edit were the natives' chants and a brief piece that plays during the jungle trek. It was in this film that Godzilla's theme would be properly introduced, although it was first heard by American audiences in 1964 with the release of Mothra vs. Godzilla, although the Godzilla theme in that film was also a modified version of the theme heard here. Fortunately, La-La-Land Records released the original Japanese version of the score, in its original stereo along with two bonus tracks, in America in 2005.

The original idea for the film was actually conceived by Willis O'Brien, although it didn't feature Godzilla at all. It was only through numerous rewrites that Godzilla eventually became King Kong's adversary, and that was only after the script was bought by John Beck, who then sold it to Toho. The differences between the Japanese version of the film and the American version are discussed on the trivia page. The plot description in the synopsis page will cover the Japanese version of the film.

The film was a commercial success back in 1962, and made over 350,000,000 yen at the box office, with a budget of 5,000,000 yen. At the time the movie was made, King Kong was still more popular than Godzilla. The Godzilla suit used in the film, named the KinGoji suit by fans, remains very popular, and the design was used for some of the earliest Godzilla merchandise stateside. In the following installment, the costume was reused for a few "big pool" scenes, namely when Godzilla is seen swimming towards Iwa Island, and later when Godzilla falls into the sea, covered in the webbing of Mothra's larvae.

King Kong vs. Godzilla also remains notorious for being one of the most poorly preserved Kaiju Films from the 1960s and has had a rough history on video. In the 1970s, the film was edited down to 74 minutes for the Toho Champion film festival... on the original negative. As consequence, the cut 24 minutes went missing. In the 1980s, Toho's first video release used an awful 16mm print for all cut shots, but in 1991, the cut portions magically reappeared in 35mm, which Toho used for a marginally better restoration. Then those elements went missing again, somehow, and Toho's DVD is just an upscale of the laserdisc master. For Toho's Blu-Ray release, most of the rediscovered segments were finally integrated again along with footage from the U.S. cut. Finally, in 2014, the uncut version of the film underwent a serious digital 4K restoration that finally used the entirety of the available Japanese camera negative, as the shots from the first reel were uncovered again. The restoration was simulcast on TV and in Toho-owned theaters in the summer of 2016, and was met with very positive reception from audiences.

Followed by Mothra vs. Godzilla.

See also 2021's Godzilla vs. Kong, a modernized take on the showdown that's part of the MonsterVerse.

Tropes exclusive to the U.S. version:

Tropes exclusive to the Japanese version: