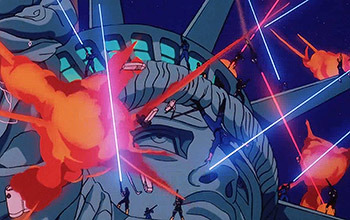 "Wouldn't it be more appropriate to light up her torch?"
Destro: Cobra! Destroy the Taj Mahal!
Tight Ship: Why is Cobra attacking a tourist attraction with zero tactical value?
— Community, "G.I. Jeff"
Advertisement:

Somehow, a disproportionate number of fictional fights break out at easily-recognized national monuments and landmarks around the world.

One reason for doing this is that at least a portion of the audience will be familiar with the monument in question, whether by general knowledge or by having actually been there. This means the author doesn't have to justify the presence of a massive, ancient structure they just made up. In addition, the audience may feel more involved because the setting is familiar (allowing them to concentrate on the action), awed (because the setting is visually impressive), or concerned (because the setting itself might be in danger, and so elicits its own emotional response in anticipation of its defacement or imminent destruction).

This can be justified several ways: the landmark, or something buried underneath it, is said to posses occult powers; there is something of importance about the landmark itself, like a clue left by an Ancient Conspiracy; or there is a major delegation of world leaders being held very close by. As often as not, however, it's a simple case of Small Reference Pools.

A consequence of The Eiffel Tower Effect, see also Monumental Damage. Compare The Very Definitely Final Dungeon - when the monuments are fictional, and the architects aren't limited by common sense. Or, often, the laws of physics. See also Landmarking the Hidden Base and Weaponized Landmark, which go a little way explaining why some of the battles take place where they do. This can become Harsher in Hindsight if some disaster ends up later destroying the monument you so gleefully smash in your work.