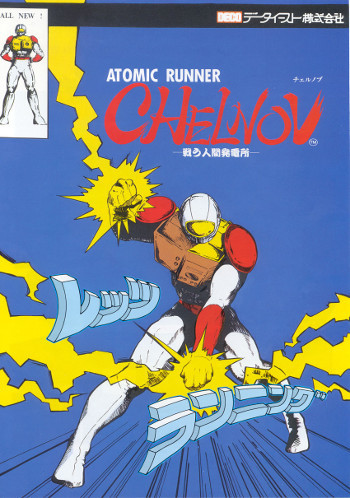 Go ahead and fight! Chelnov, the Invincible Warrier (sic).
Atomic Runner Chelnov is a 1988 arcade action game, developed and published by Data East. You take a role of Chelnov who after becoming superhuman after being exposed to radiation, made a vow to thwart the evil plan of the nefarious Deathtarians.
Advertisement:

The game itself is a hybrid between side-scrolling platformer and shoot-em-up: You run, jump, and shoot out laser (your arsenal can be upgraded by picking up items), but you have no control over the screen scrolling, in fact the game always keeps the screen moving forward sans periodic boss fights. Enemies usually take advantage of this, ambushing you from all sides, so you always need to stay on your feet to survive the stage.

Upon release, Chelnov soon became one of Data East's best known titles among arcade goers in Japan, perhaps because just how darn weird the whole game is. Apparently, Data East loved it too, because they ported it to Sega Genesis in 1992, and kept putting this Russian miner to their games as cameo appearance (often alongside their de facto mascot Karnov).