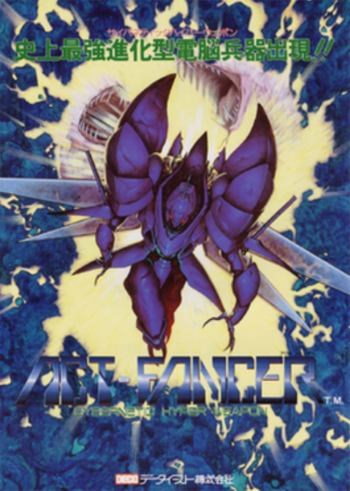 THIS. IS. YOU.
Advertisement:

Act-Fancer: Cybernetick Hyper Weapon is a 1989 arcade Run-and-Gun action game developed by Data East, the same guys behind Atomic Runner Chelnov a year ago, with a similar gameplay format.

An infestation of alien bugs broke out in a human city, after a military transport plane containing alien cargo has an unexpected crash-landing. It's contents leaks into urbanized areas, spreading and multiplying at rapid pace; being capable of parasitizing life-forms turning human victims into grotesque insectoid mutants, soon enough it gets out of control

With most of planet earth in ruins, a cybernetically-enhanced human soldier, codenamed Sci-Vax, immune to the alien virus, is sent to earth to contain the outbreak.