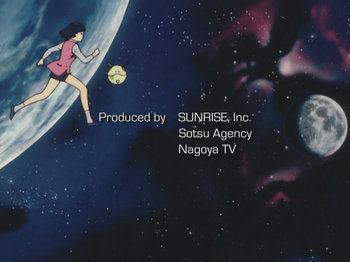 This running through space brought to you by Sunrise.
Kohaku: Oh right, it's time for the ending theme! Let's run!
Akiha: Huh? Why?
Kohaku: You didn't know? There's a jinx that says people run during the ED in good anime!
— Carnival Phantasm
Advertisement:

In a lot of anime, a character (usually the protagonist) will show up in the opening or ending credits, running along while remaining on a fixed spot on-screen. The character could be running the whole time, or start out walking slowly and gradually pick up speed. The background is usually of the scrolling kind, but sometimes the character actually seems to run through a changing scenery. In any case, it's rare for characters to maintain a leisurely speed the whole time; usually, this has something to do with either the pace of the music, or the animators' need to keep opening and ending themes moving fast at all times.

Side-on running and walking cycles are often created by animators as a way to get a feel for the characters, and these cycles will no doubt be used at some point in the show, so this could count as a cross between Shown Their Work and Stock Footage.

This trope can occasionally overlap with Team Shot.

The Title Card for Ghost of Tsushima drops while Jin rides his horse at full speed through a rice field.

The Title Card for Ghost of Tsushima drops while Jin rides his horse at full speed through a rice field.