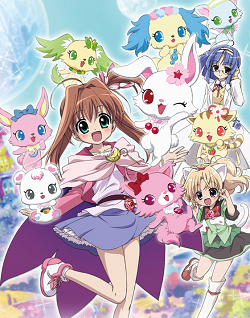 Jewelpet Twinkle is the second entry in the Jewelpet anime series.

Akari Sakura is on her way to start her sixth grade at the Winston Academy, when she meets the magical talking rabbit Ruby. Ruby wants Akari to come with her to Jewel Land and study together with her at the Magic Academy. Akari at first refuses, but after they come to understand each other, she decides to accept. And so begins the tale of this shy girl's self improvement, as she struggles through her magical studies in order to gather 12 Jewel Stones, which will allow her to compete in the Jewel Star Grand Prix, the winner of which is granted three wishes.

At the Magic Academy, Akari makes many friends, such as boisterous idol singer-wannabe Miria and distant academical genius Sara. Back in the human world, her heart is set on the mysterious Yuuma Jinnai. She also confronts Jewel Land's dark history through an elusive student who for some reason greatly resembles Yuuma.

It's the only Jewelpet season so far to get a sequel, which comes in the form of an OVA, released in the Summer of 2013.

Akari finally manages to tell her crush after much anguish.

Example of:
Anguished Declaration of Love

Akari finally manages to tell her crush after much anguish.