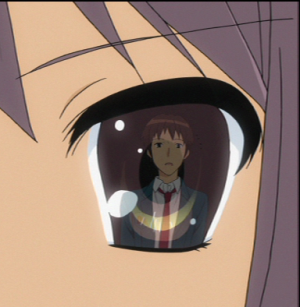 A character's eyes reflecting what they see. A useful visual effect because it allows the audience to see the character's reaction at the same time as they see the action happening. It's a nifty effect that has not passed the notice of writers and has been used by them in various ways. Very much Truth in Television, although exaggerated for more visual effect.

May also be used with Cool Shades, Scary Shiny Glasses, lenses, and other forms of eye coverings. Compare Wingding Eyes, and more specifically for when a characters' pupils turn into stuff based on opportunities they're seeing.

Pinkie is suspicious when Applejack denies her invitation to Gummy's after-birthday.

Pinkie is suspicious when Applejack denies her invitation to Gummy's after-birthday.