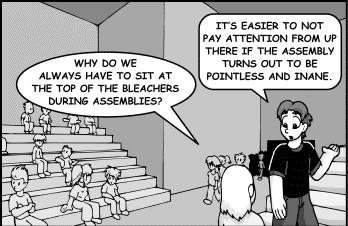 Actually, It's Just Easier if I Don't Have to Draw Anyone Sitting Behind Them

When a scene takes place in a classroom, the Ordinary High-School Student tends to be located wherever is the most convenient for the author, plot, or characterisation of the character.

If the teacher doing his teaching is an important part of the plot, the teacher will be sitting on the middle of the front row, so that a shot can be taken from behind the main student cast, facing the teacher.

In anime, the second seat from the back, along the side with the windows (which is always the left-hand side of the classroom) seems to be extremely popular. It's even nicknamed "The Protagonist's Seat." When a character other than the main protagonist sits in the protagonist's seat, this usually means that they are the Decoy Protagonist, or a Hero of Another Story. This may lead to them believing that they are the "main character" (either of the actual story itself, or of life). Then again, we are all the main protagonists of our own story.