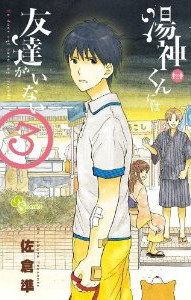 Having transferred schools all her life, Chihiro Watanuki has never had any close friends. When she learns that her family will be settling into their new place for years to come, she's intent on making friends at her new school. Joining high school as a second-year, the first person she meets at school is Yuuji Yugami, who helps her find a spot in the school's bike lot to park her bicycle. To her surprise, she's put into the same class as Yugami and even ends up sitting next to him. Maybe she's already made her first friend at school!

...Or not. Those thoughts are promptly dashed, as Chihiro quickly finds out how much of an oddball Yugami is. While he's The Ace pitcher of the baseball club and is a good student to boot, he's actually isolated by the rest of the class and doesn't get along well with his teammates. Surprisingly, none of this fazes Yugami one bit because he has no intention of making friends. Despite being warned by her classmates to not associate with him, Chihiro constantly finds herself interacting with Yugami and quickly gets pulled into his weird life. As it turns out, even though he's troublesome to deal with, Yugami ends up helping Chihiro along the way as she struggles to make friends.

Yugami-kun ni wa Tomodachi ga Inai (Yugami Doesn't Have Any Friends) is a Slice of Life comedy manga by Jun Sakura. Initially published in Shonen Sunday S on July 2012, the manga eventually moved to Weekly Shonen Sunday on the 48th issue of 2013, where it is published on a monthly basis. The manga ended on the 25th issue of 2019 with 81 chapters. It has a total of 16 volumes with the last one being released on July 23rd, 2019.

A-1 Pictures animated two 30-second commercials to promote the series, which you can watch here

. A limited edition of volume 6 also came bundled with a drama CD.

Not to be confused with a series where the protagonist doesn't have many friends.

Alternative Title(s): He Does Not Have Any Friends