Standing in the Hall 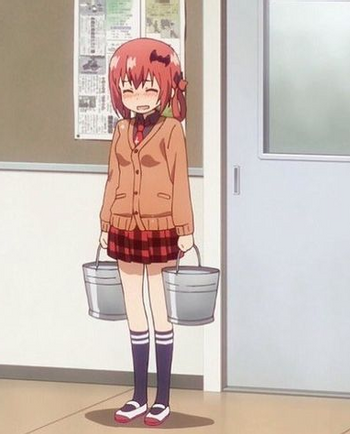 Until the 1970s, a common punishment used by Japanese school teachers for tardiness or rowdiness in class was to have the student (almost always a boy) stand out in the hall holding two water-filled buckets (every classroom has buckets since the students normally do the cleaning anyway); the public disgrace could be compounded if the student weakened and had to put the buckets down on the floor.

While being asked to stand outside the classroom as punishment is hardly unknown in Western schools, of course, the buckets of water are an added wrinkle unique to Eastern schools.

Now used jokingly — similar to references to "teacher's hickory stick" (being rapped on the knuckles with a ruler), or sitting on a stool wearing a Dunce Cap. Often the fate of the Class Clown.

Becoming a Discredited Trope, due to the times, and also due to some Values Dissonance. Not commonly used in Western schools because kids might take the opportunity to wander about the school instead of standing in one place (and some might even consider it a reward, not a punishment).