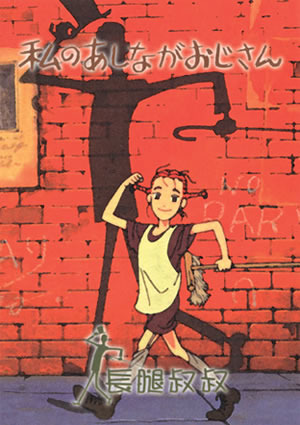 My Daddy Long Legs is a 1990 anime series based on Jean Webster's novel, Daddy-Long-Legs. Directed by Kazuyoshi Yokota for Nippon Animation, the series is part of the studio's World Masterpiece Theater. It shares the central premise of that novel: a poor orphan is educated by a mysterious benefactor, about whom she knows nothing except what his shadow looks like. She is required to write to him and inform him of her progress, and she does so, developing a one-sided relationship with the mysterious figure who becomes the closest thing she has to a parent or guardian. Over the course of the series, she develops into a strong writer, becomes more confident about her place in the world, makes friends and finds love. In other words, it's a classic Coming of Age story focused on the development of a writer.

Despite sharing the main characters and many plot events, the anime series differs significantly from the novel in many ways. Most notably, Judy is aged down. In the novel, she is a college student; in the anime, she is a high school student. The setting is roughly the same in terms of geography, but the time period changed from the Pre-World War I era to The Roaring '20s. The plot is also fleshed out with additional story arcs and characters, which was necessary in order to transform a relatively short epistolary novel into a 40-episode series. Insert Songs were also added to showcase the singing talents of Judy's voice actress, Mitsuko Horie.

This series is the second anime adaptation of Webster's novel, preceded by a Tatsunoko Production TV special in 1979 which was directed by future Superbook director Masakazu Higuchi. Since Tatsunoko's version was dubbed into English and released in America while the Nippon Animation series was not, English-language sources sometimes confuse the two (and confounding this is the fact that Judy is a redhead in both versions, though she does not have Girlish Pigtails in Tatsunoko's).