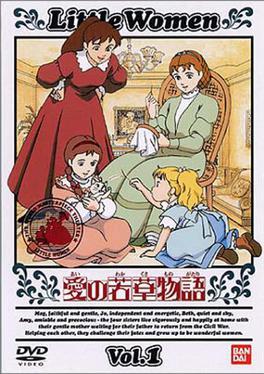 Little Women, also known as Ai no Wakakusa Monogatari (愛の若草物語?, "Love's Tale of Young Grass") is a 1987 Japanese animated television series adaptation of Louisa May Alcott's Little Women, produced by Nippon Animation and Fuji Television as part of the World Masterpiece Theatre and directed by Fumio Kurokawa (Princess Sarah). While it's the third anime adaptation of the source material (following a 1980 TV special by Toei Animation and 1981 TV series by Movie International), it's also probably the best known, and gained some fans in Alcott's home country of the United States through its 1989 broadcast on HBO, renamed Tales of Little Women (a pretty close colloquial translation of the Japanese title of the series). The English dub has also been re-aired on Smile (formerly Smile of a Child), a Trinity Broadcasting Network-owned broadcast and digital-tier cable channel specializing in Christian and family-friendly children's programming, but is no longer being aired on Smile as of June 2018. However it has since been released on Amazon's Prime Video streaming service, and English dubbed and subtitled episodes are available for viewing on YouTube.

As with other World Masterpiece Theatre entries, the animated series is loosely derived from the book and introduces new material and characters. The series begins with the introduction of the March family happily living near Gettysburg (the nearby town of York in the English version), until one day during a picnic, Mr. March notices Confederate scouts at a riverbank. As an officer of the Union Army on leave with a broken arm, Mr. March hesitantly leaves his family to inform his superiors and to prepare for the upcoming battle. Meanwhile, his family endures the Confederate occupation and even helps an escaped slave named John from being forcibly recruited to fight for the Confederacy.

Eventually, Union forces arrive and in the ensuing battle the March family home is destroyed and their investment (which had also been their savings) stolen. With no other options, the family leaves Gettysburg to Newcord, where they hope to be taken by an estranged aunt of father. Upon arriving in Newcord, they are coldly received by the old woman and even less so by David, an egotistical nephew who constantly asks for loans and antagonizes the family. Despite the reception, Aunt March allows the family to stay at home until they can get back on their feet.

Determined to have a sense of normalcy and persevere their hardship, Meg finds work as a Governess while Jo alternates between being a companion to Aunt March and Author. During a sales pitch to sell a short story to a local newspaper, her work and her character are presumptuously criticized by Anthony, a local reporter. Upset and resolute, Jo throws herself into her writing ultimately earning the respect of Anthony and forms an amicable relationship.

In time, the March family moves into a new home and the events that follow begin to reference the plot of the original novel: The 18th episode is based on Chapter 3 and follows the first part of the book. The storyline from Chapter 1 (Christmas 1863) begins in episode 21.

A sequel series, Little Women II: Jo's Boys, premiered in 1993. Unlike its predecessor, this series has not been dubbed in English.

The anime provides the examples of: