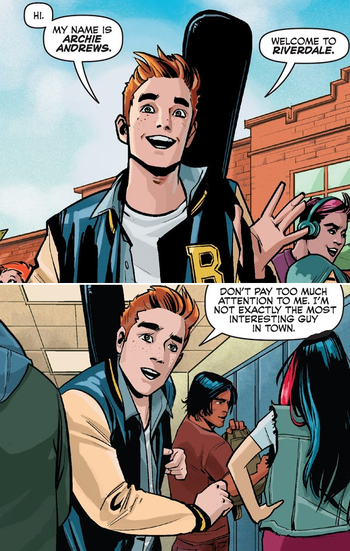 I did manage to find a few jumpsuits, and a few shirts, mostly of the touristy T-shirt type. You know the kind; "My dad went to the Caribbean and all I got was this crummy t-shirt?"
— Whateley Universe: Merry Descent into Madness
Advertisement:

To further the reader into the environment, the characters, and the Aesop of a story, what some do is to have the story be narrated by one of its own characters. That character does the narration, and everything the reader takes in comes directly from his own Point of View. The character is usually also the protagonist, although there are exceptions (such as a First-Person Peripheral Narrator telling the story of a Non-P.O.V. Protagonist).

This can make the story more challenging to understand since you only get to know what this character thinks: if there are other characters, and there is a tension between them and the narrator, not only will you be in the dark about their purpose or morality, but all the info you get about him or her will be biased. Similarly for a person who the narrator specially admires, who will be portrayed as much more heroic and generally better than (s)he really is. In some cases, the narration could be even delusive, and the challenge is to understand the actual situation behind your referent's words.

Subtrope to First-Person Perspective. Likely to be a Lemony Narrator. Also likely to invoke The All-Concealing "I". If excessively snarky, it's a First-Person Smartass. This person may be Narrating the Present. If they are the narrators but this only is discovered during The Reveal, this becomes Narrator All Along or a Delayed Narrator Introduction. Compare Interactive Narrator, who is known by and converses with the characters, but never appears onscreen, and Private Eye Monologue, which is this, but occasionally and generally more poetic. Rare outside literature.

Brandon Was His Name...

Speaking like he is a part of a horror story, Brandon introduces himself within the episode of Elliot Goes Camping as though he is from Alan Wake.

Brandon Was His Name...

Speaking like he is a part of a horror story, Brandon introduces himself within the episode of Elliot Goes Camping as though he is from Alan Wake.