Manga / The Dangers in My Heart 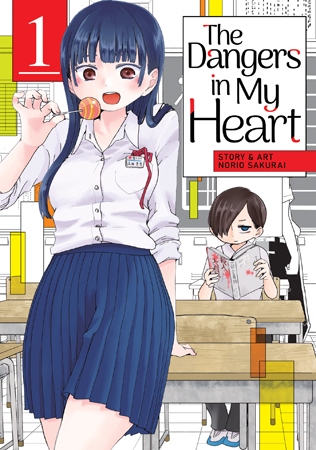 The Dangers in My Heart (Boku no Kokoro no Yabai Yatsu) is a shonen romantic comedy manga by Norio Sakurai, who previously created Mitsudomoe. It began serialization in 2018 in Weekly Shonen Champion, later moving to Champion Cross a month into publication, and moving again to Manga Cross after the website merged with Champion. It was nominated for the 2020 Manga Taisho Award, and later licensed in English by Seven Seas Entertainment.

Kyōtarō Ichikawa is utterly convinced he is the tortured main character of a "fearsome psycho-thriller" centering on "the dark side of adolescence." A recluse and isolated from the rest of his classmates he spends his days fantasizing about ways to destroy the peaceful junior high life his classmates share. Surely this is a tale of a person at the very bottom caste of his school, who hides murderous impulses that lurk at the very bottom of his soul.

Not really. In actuality, this piece of work is a ridiculously sweet Rom Com about Ichikawa trying to maintain the peace (while still claiming he is a being of evil), and Yamada Anna, his class' idol who actually is a bit strange herself.

Think The End of the F***ing World meets Teasing Master Takagi-san, and you've got The Dangers in My Heart.

The Dangers in My Heart provides examples of: