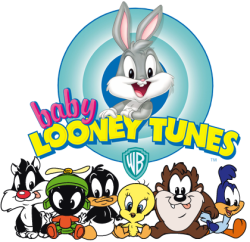 Pint sized looniness.note From left to right: Sylvester, Marvin, Daffy, Tweety, Taz, and Road Runner. Bugs is at the top.

Baby Looney Tunes is an animated program that ran from 2001 to 2006. Similar to Muppet Babies (1984), this program features baby versions of Bugs Bunny, Daffy Duck, Lola Bunny, Taz, Sylvester the Cat and Tweety Bird and other Looney Tunes characters with Granny as their caretaker. Her grandson, Floyd, was introduced as a Canon Foreigner, and other Looney Tunes members either make cameo appearances in songs, or as guests in some episodes.

The show is very cute and has some charming writing, but being a show targeted explicitly at preschool audiences resulted in older fans of the Looney Tunes brand to look upon it with derision.