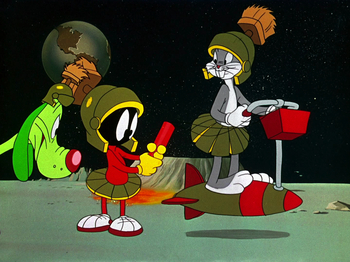 "Haredevil Hare" is a 1948 Looney Tunes theatrical cartoon directed by Chuck Jones, and starring Bugs Bunny and Marvin the Martian, with the latter in his debut. It is one of The 100 Greatest Looney Tunes.

When scientists declare they are sending a rocket to the moon, Bugs "volunteers" to be the pilot. At first, the rabbit is reluctant, until he sees the millions of carrots as his ration supplies and immediately jumps in. After a forceful blastoff, Bugs goes on a wild ride before crashing on the moon. However, Bugs isn't alone on the moon for long as another rocket soon arrives, carrying a bizarre-looking creature. At first, Bugs talks friendly with the being, Marvin, until he realizes that he intends to blow up the Earth and confiscates the creature's Uranium Q-36 Explosive Space Modulator (i.e a stick of dynamite). When Marvin retaliates by summoning his dog, K-9, to go after Bugs, the rabbit uses his wits to deceive the two, which unfortunately puts himself and his adversaries in a bad fix in the end.

Of special note, this is the most recent Warner Bros. cartoon made available on the Associated Artists Productions syndication package.