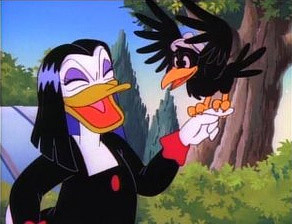 A witch did it.
"Oh, Larry got himself an entourage, you know? I guess he's thinking to himself like he's a superstar now that he is a turtle with a white mohawk somehow. Turtles are not meant to be able to grow hair, I'll have you know. I know! It is something I had to learn myself the hard way back in kindergarten, when I mistook a turtle for a 100 gigawatt bolt of cloth! Then I was wondering why it wouldn't swim and I was rather the sad little critter."
— raocow, being only semi-relevant to this trope.
Advertisement:

Some non-mammalian cartoon characters are drawn with what looks to be real hair on their heads, despite the fact that real hair is exclusive to mammals and one of our defining traits. Bird characters tend to get away with this the most, since their "hair" can be handwaved as feathers that happen to look like Tertiary Sexual Characteristics, namely long "hair" on female characters.

Lesser versions of this trope include non-mammals with eyelashes (another signifier that the wearer is female) or eyebrows to make human-like facial expressions. This trope is tricky to extend to aliens whose species probably can't be defined on our terms.