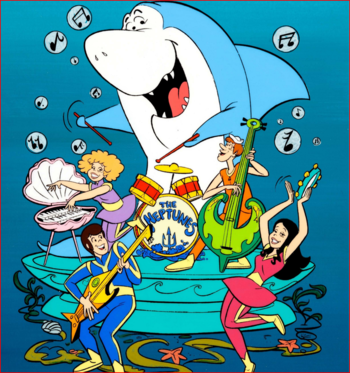 In 1976, Hanna-Barbera created this show for ABC as a response to the popularity of the film Jaws. Frank Welker based the lead character's voice on Curly Howard from The Three Stooges, along with Rodney Dangerfield's Catchphrase, "I don't get no respect." note He would later go on to actually voice Curly in "The Robonic Stooges" segments on Skatebirds using the same voice.

Jabberjaw, an amphibious shark, is the drummer in a rock band called the Neptunes. His human friends are guitarist Biff, bassist Clamhead, keyboardist Bubbles and tambourinist Shelly; the last appeared to be allergic to Jabberjaw's displays of affection. When they're not making music, Jabberjaw and his friends solve mysteries Under the Sea, in yet another variation on the Scooby-Doo formula. They live in a future when the ocean floor has been extensively colonized, with domed cities and the like.

In subsequent appearances, Jabberjaw was a referee in Laff-A-Lympics and a competitor in Yogi's Space Race.

Cartoon Network did a short music video in the 1990s that revisioned the Neptunes as an alternative-rock band, with Clamhead as a trumpeter; the video aired regularly as filler on the Boomerang network until 2014 when Boomerang became ad-supported. Most recently, a gender-flipped version of Jabberjaw is part of the cast of Jellystone!, working in Magilla Gorilla's accessories store.

Who's gonna talk like Curly, since Curly isn't here?
Who's gonna chase down villains and then turn around and run in fear?
Who's gonna stand for justice, when bad guys break the law?
You know who I'm talkin' about, we're Clamhead, Shelly, Bubbles, and Biff,
but if you're catchin' a whiff of fish, it's Jabberjaw!
— Pain, From their song "Running Underwater"