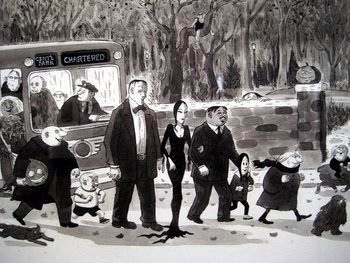 The Addams Family is a franchise spanning multiple media.

It has its origins in a series of whimsically grotesque single-panel cartoons by Charles Addams that appeared in The New Yorker beginning in the 1930s. In the 1960s these inspired a TV sitcom, which chose a set of recurring characters, named them and codified their relationships with each other, and served as the model for all subsequent versions.

A deliberate inversion of the ideal American Nuclear Family, the Addamses are an obscenely wealthy clan of borderline supernatural beings with a taste for the grotesque and macabre, holding opinions and preferences that are mirror images or inversions of more conventional attitudes. Although very visibly different from virtually everyone they meet, they still perceive themselves as a "perfectly normal family"; in fact, they seem somewhat incapable of even noticing that their lifestyle varies widely from that of their neighbors.

They also invert various horror-movie tropes about evil families: despite their tastes and the apparent trappings of pain and horror amidst which they live, the Addamses are clearly (well, mostly in the movies) NOT evil — they are compassionate and loving, friendly to all they meet, eager to help strangers in times of need, and tolerant to a fault. In fact, they are probably more so than most families! The end result is more delightfully eccentric and endearing than disturbing.

The Addams Family have appeared in: