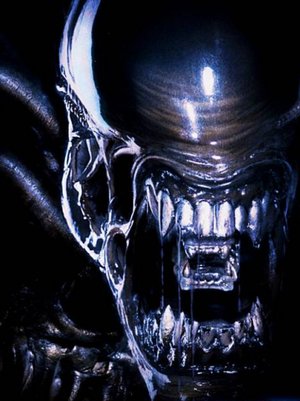 You don't get more Alien-looking than this.
"Ow, my squeedilyspooch!"
— Zim, Invader Zim
Advertisement:

Extra-terrestrials are weird. Sometimes, really weird. They may look relatively normal or mind-bendingly freakish, but whatever their appearance, you can bet that they don't work like us. They may have green blood or six sexes or any of a variety of other features that make it clear: these are aliens!

Hard Science Fiction is more likely to feature really bizarre examples of Bizarre Alien Biology, though the soft end can get pretty weird at times too, especially when the Rule of Cool or Rule of Funny is in play.

May turn up during an Alien Autopsy. Compare Anatomy Tropes. Assuming that extra-terrestrial life exists (at least in forms more complex than bacteria), this is almost certainly Truth in Television; the idea that life evolving on an entirely different planet would be particularly similar to life that evolved on Earth is so unlikely as to not even be worth considering. If the brain in particular is different, it often results in Bizarre Alien Psychology. Based on a similar concept to the Furry Reminder.

If it is humans who get stuff humans do not normally have, it's Bizarre Human Biology. See also Speculative Biology.

Categories of aliens that may display Bizarre Alien Biology:

Note: Ordered from most human-like to least

Examples that don't fit in the above categories: