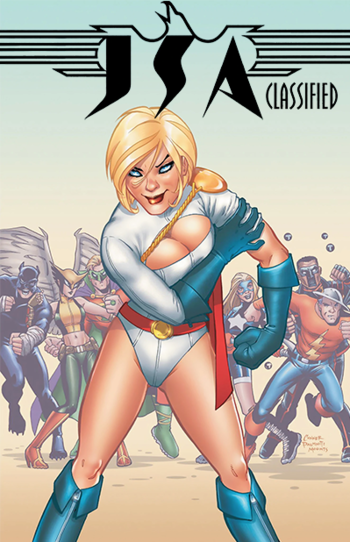 JSA Classified is a DC Comics book featuring the Justice Society of America that ran for 39 issues from to 2008. The book is broken up into storylines lasting from one to four issues featuring individual members of the team or their foes.
Advertisement:

The storylines in JSA Classified are:

Power Trip
"As long as I can juggle semi-trucks and leap over buildings, I'm fine."
—Power Girl

The Fall and Rise of Vandal Savage

You too have had partners. Many of them, down the decades. Perhaps just as Smithy and Beauchamp led me down the path of destruction one of your deceased friends will do the same to you.
—Vandal Savage

In rare cases the alcohol/opiate mix has left certain patients blissfully oblivious to pain, but fully awake during the procedure. Better that he surrenders fully to sleep. Elective or unplanned and unwilling, surgery is an experience best left unseen by the patient.

"Baloney. The top brass in Washington never had clean hands. Just ask the survivors of Dresden or Hiroshima. It was Mystery Men like you who stood for something better, even the hoodlums looked up to Green Lantern. You were the super-man before there was a Superman! The world only seemed to make sense back then because guys like you set the standard! And now you're gonna let this Father Time putz drag you down to his level?"
—Jonathan Waddill