Ancient and massive creatures that existed hundreds of millions of years ago, feeding on the nuclear radiation the planet generated. Most of them were wiped out, making way for new life to take their place, but some remained in hiding or hibernation, surviving the deaths of their kin in the process. Humanity's advances in nuclear power, strip mining, and other developments have begun to awaken them, drawing them to the surface and bringing destruction in their wake.

Advertisement:
Tropes shared by all Kaiju 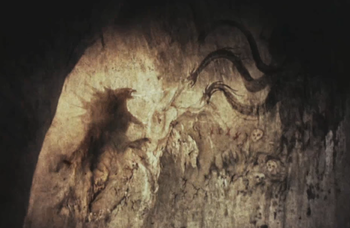 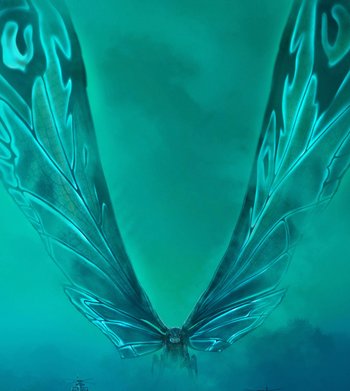 "Then from the smoke came locusts on the earth, and they were given power like the power of scorpions over the earth. They were told not to harm the grass or any green growth or any tree, but only those of mankind."

A giant, lepidopteran kaiju which Monarch found incubating as an egg inside an ancient temple within China's Yunnan Rainforest, referred to as the "Queen of the Monsters". She is considered an Alpha Titan in her own right who has a symbiotic relationship with Godzilla's species. After hatching, she proves to be the most benevolent of the Titans towards humans by far. She is woven throughout most secret mythologies and folklores as an angel of the clouds, a deified protector of humanity and the natural order. She possesses powerful bioluminescence which can shatter the skies and can be weaponized into "God Rays" if necessary, and a unique multi-stage evolution from an egg to a larva to her imago form. 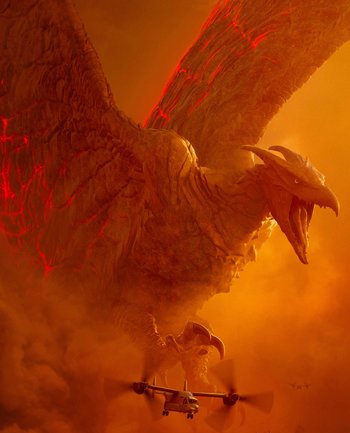 "For the Beast that comes up out of the Abyss will make war with them, and overcome them... and kill them."

A massive, aerial kaiju resembling a mix of a bird and a Pteranodon, found by Monarch hibernating inside the vent of the volcano El Nido del Demonio (translates to "The Demon's Nest") in the Mexican island of Isla de Mara. Local legends refer to him as a demon of fire, and his common name is recorded in the temples of volcanically active regions. He possesses a magma-based internal combustion system coupled with geothermal armor that enables him to survive the super-high temperatures of his magma-filled resting place, whilst his vast wingspan is enough to create sonic thunderclaps that could level entire cities if he ever takes flight.

"Adam" aka Dagon or Raijin 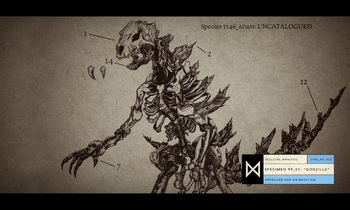 "No. This one's much older."
—Dr. Ishiro Serizawa

A dead, fossilized member of Godzilla's species found in 1999 after a mining company stumbles upon it, Adam was presumably killed by MUTO in ancient times as his remains are where the spores of the MUTO pair we see in the movie were found. Aftershock reveals he was killed by the MUTO Prime. 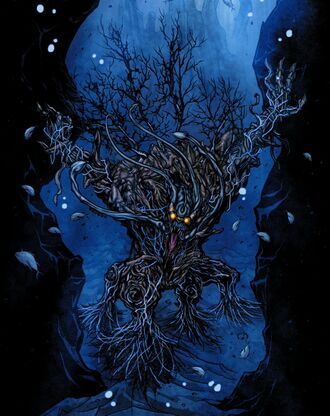 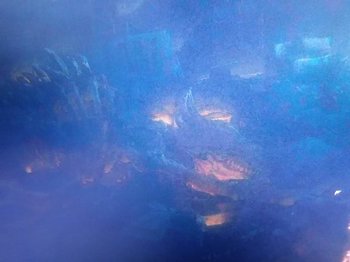 A Titan with close ties to Godzilla. The skeletal remains of one were seen in Godzilla's home.
Behemoth 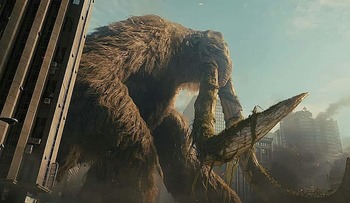 Behemoth is a lumbering, furry, mammalian creature with enormous curved tusks, looking something like a hybrid between a quadrupedal tusked ground sloth and a woolly mammoth with a short trunk. He is contained in Brazil but breaks free when Ghidorah instigates a mass awakening. The novelization also refers to him as "Mapinguary", after a Brazilian cryptid. 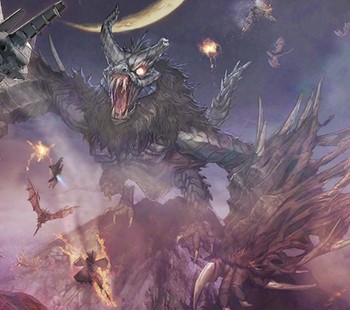 A bat-like Titan. He never appears in any of the films, but he is mentioned in the Godzilla: King of the Monsters and Godzilla vs. Kong novelizations and fought Kong in the Kingdom Kong tie-in comic. 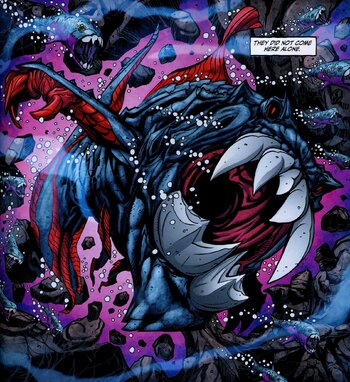 A Sub-Titan briefly encountered in Godzilla Dominion It took up residence in the wreck of Godzilla's old home near the Hollow Earth. 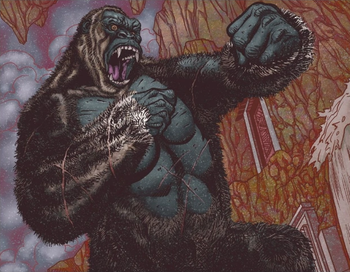 A member of Kong's species who once fought and drove Godzilla out from one of his old lairs. He was eventually killed by Tiamat.

One of the off-screen Titans awakened by King Ghidorah, Leviathan was contained in Loch Ness, Scotland. 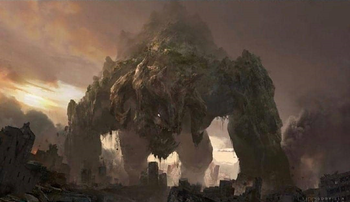 Methuselah is a gigantic quadrupedal creature with a dinosaur-like head, bull-like horns, and a mountain on its back. He is slumbering in Munich, Germany, but awakens when Ghidorah instigates a mass awakening. In the novelization, it's stated that he destroyed a village on the site in the Middle Ages before falling asleep.

Appears In: Godzilla: King of the Monsters (novelization)

A minor Titan who appears in the novelization of Godzilla: King of the Monsters, resembling an earless reptilian elephant with a long tail, crocodilian fangs, and a single horn. He is contained under Jebel Barkal in Sudan but breaks free when Ghidorah instigates a mass awakening. 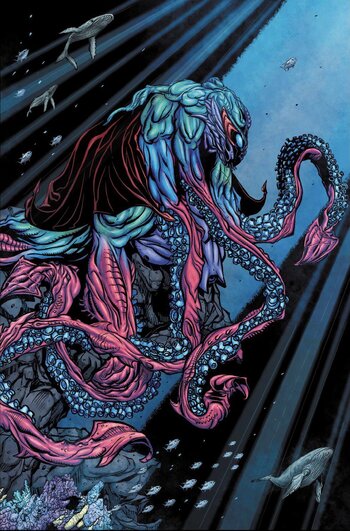 A minor Titan who first appears in the novelization of Godzilla: King of the Monsters, Na Kika (also nicknamed Kraken) resembles a massive cephalopod. She is contained in the Indian Ocean but breaks free when Ghidorah instigates a mass awakening. In Godzilla Dominion and the prologue of the novelization of Godzilla vs. Kong, she is captured by Titan traffickers and rescued by Godzilla. 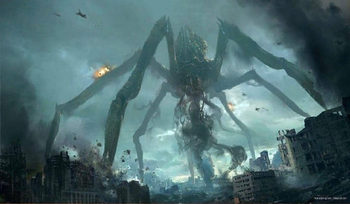 Scylla is a gigantic cephalopod-like creature with squid-like tentacles, six crab-like legs, and a spiral shell; located in Sedona, Arizona. 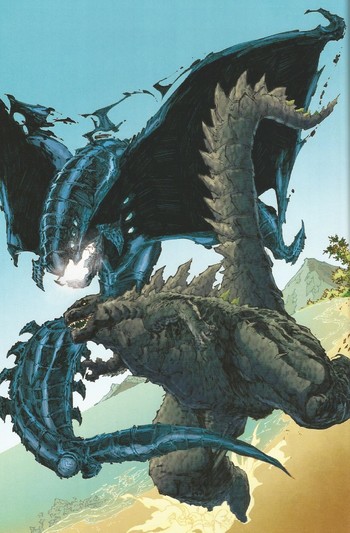 The monster that serves as the main antagonist in Godzilla: Awakening. 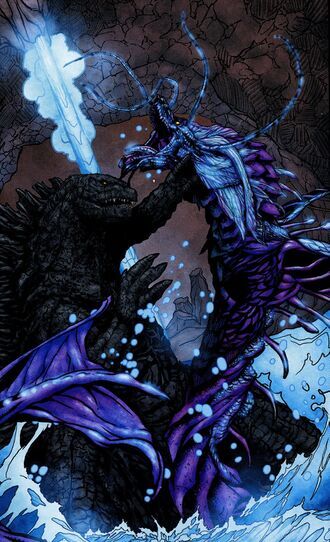 One of the off-screen Titans awakened by King Ghidorah, Tiamat is a female draconic sea serpent that was sleeping under Stone Mountain in Atlanta, Georgia. After Godzilla defeated King Ghidorah, Tiamat settled in a sea cavern below an atoll once occupied by a member of Kong's species. When Godzilla was looking for a new home, he came to the atoll and defeated her to claim it as his new resting place.

A species of cobra-like serpentine Sub-Titans with fin-like wings, which inhabit the Hollow Earth.
Hellhawks

A species of large bat-like creatures with hooked beaks, which inhabit the Hollow Earth.
Rock Critters 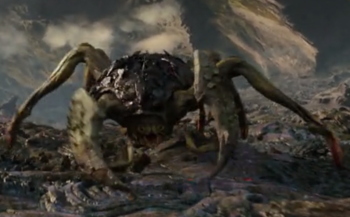 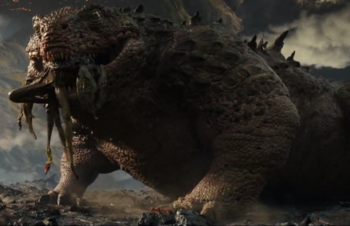 A Scaly Quadruped feeding on one of the Rock Critters

A large species of lizard-like animals who live in the Hollow Earth's rocky ecosystem, feeding on smaller animals that cross their path.