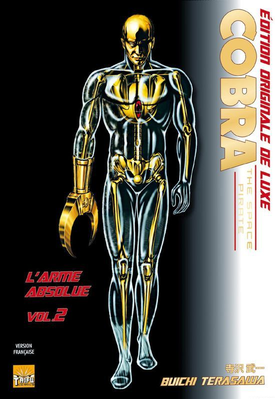 One way to show off the inhumanity of a race of non-humans or monsters is to give them a Sculpted Physique where their entire body may look like an abstract sculpture made of organically grown metal, mother of pearl, or even feathers.

For all intents and purposes the creature or character looks as though they've been sculpted out of stone, wrought from metal, born part plastic, or a strange meld of flesh and technology. Common features include wings (especially if the Sculpted Physique is part of a Super Mode or One-Winged Angel), an arm-gun, Power Crystal studs, crystalline body parts, a Heart Drive or being covered in a too-literal body armor.

If the creature is a Monster of the Aesop made from the Victim of the Week, the result tends to look like the human took a toaster (or more eclectic fare) through a matter teleporter and got fused along the way. Usually it's highly aesthetically pleasing and (a)symmetric, and looks simultaneously inorganic and completely natural. Expect damage to be represented by actual cracks on their skin/outer shell, and the body itself to be jointed as if it were a lobster or action figure.

Compare Golem (when they are made of certain materials) and Chrome Champion. Not to be confused with a Hunk, who has an entirely different sculpted physique.