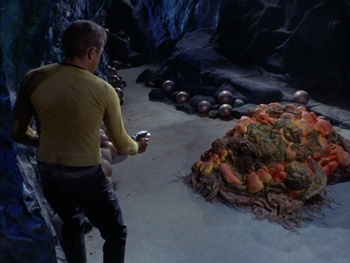 Kirk faces off against the Horta. The Horta's eggs are in the background.

The Enterprise is called to a mining planet, where the personnel are being killed by an invisible creature. Said creature turns out to have a point of view too; she is the Horta, the mother of her race, and the human miners have been carelessly destroying her eggs, thinking they are nothing but a curious mineral formation. These facts are established by Spock through a mind meld. The miners — to their credit — are appalled at what they have unknowingly done, and the Horta is presumably equally distressed to discover the aliens she's been killing are not deliberate child murderers. Happily, both sides are willing to let bygones be bygones and Kirk is able to negotiate a peace treaty and alliance that makes the human miners — and presumably the Horta — "embarrassingly rich".

The Tropes in the Dark: