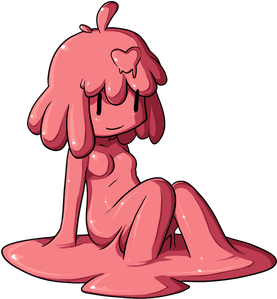 Without beating around the bush, a slime girl is a girl made of slime.

Slime girls are a thicker variation on the idea of being made of water. They tend to come in a variety of colours and substances, which range from fairly harmless unspecified slime to piles of living sludge.

Slime girls usually follow a similar pattern. Their lower halves will usually be spread in puddles in which they could be mistaken to be bathing. When they eat they simply ingest the desired object, without leaving any waste substance. The "hair", if there is such a thing, will generally be a darker shade than the rest of the body and will appear to flow down the slime girl's back like a cascading waterfall.

Whilst slime girls don't mind small droplets of water, if deposited in a sufficiently large body of water they're likely to dissipate and die.

Their personality varies as with most races, although they tend to be rather laid back and gentle unless provoked. In fictional nature, slime girls are usually the bottom rung of the ladder. Those made of liquid metal, on the other hand...