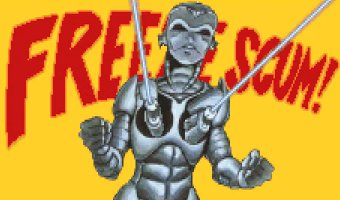 That's probably not what baby robots suckle on.
Gordon: No! He's attempting to modify Jennifer!
Prinny: Can she shoot missiles from her boobs now?
— Disgaea DS, Prinny Commentary
Advertisement:

For reasons usually related to Rule of Sexy or Rule of Funny, a woman's chest area is sometimes chosen as the source for some projectile. It could be anything from a weapon to a light show, just that it's not something that should come out of breasts (or usually even the human body).

Named for a nickname kids in The '50s and The '60s gave the "Bullet Bra" (a brassiere whose cups had a distinct conical shape, designed to.. um.. 'bolster' a lady's look, whether she was wearing a sweater or a grand evening gown).

A Sub-Trope of Chest Blaster and Super Sex Organs.

Contrast Breast Attack (when the breast is the target instead). Also contrast Marshmallow Hell (when the size of the breasts are used to intentionally or unintentionally smother someone). See also Ass Kicks You, which can come from characters of any gender.

Frau Farbissina's Fembots come packing a pair of - as Austin puts it - machine gun jubblies. Which they demonstrate to deadly effect on a set of guards.

Frau Farbissina's Fembots come packing a pair of - as Austin puts it - machine gun jubblies. Which they demonstrate to deadly effect on a set of guards.