Series / Only Fools and Horses 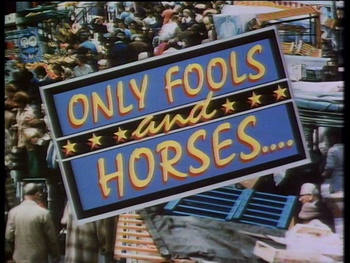 "Stick a pony in me pocket,
I'll fetch the suitcase from the van.
'Cause if you want the best 'uns, but you don't ask questions
Then, brother, I'm your man!"

British Sitcom which aired in seven series from 1981-1991, followed by a number of Christmas Specials until 2003. Created and written by John Sullivan, the series followed the adventures of the Trotter family, who lived in a council flat in Nelson Mandela House, a tower block in Peckham, London, but aimed to become millionaires. They drove a yellow Reliant Regal van (frequently erroneously referred to as a Reliant Robin) and often frequented their local pub, The Nag's Head. These get-rich-quick schemes frequently involved selling useless goods that had "fallen off the back of a lorry" (a British euphemism for "stolen").

In 1996, the series got a Grand Finale which saw the Trotters finally became millionaires after discovering a rare watch which was auctioned for £6 million. The final episode attracted a record British television audience of over 24 million. The show was then revived in 2001 for three more episodes. There was also a one-off special in 2014 as part of Sport Relief, a charity drive held by the BBC every two years; in the special, Del and Rodney rope David Beckham into one of their moneymaking schemes.

The family was made up of:

Trope namer for During the War.

The show remains the BBC's choice of things to stick on at times when they haven't got a chance of winning the timeslot, or if there's the potential that the football will overrun (meaning that the show won't get aired if the football goes into extra time). Re-runs turn up all the time on the digital channels, especially G.O.L.D. (formerly UKTV Gold) which is almost guaranteed to show at least one episode on any given day.

open/close all folders
Tropes A-L
Tropes M-Z
And that was followed by a medley of Wock 'n' Woll!