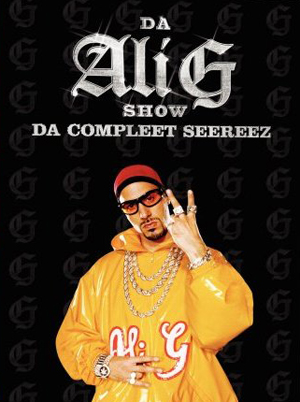 Da Ali G Show is a 30-minute comedy show that ran on Channel 4 in 2000 before Channel Hopping to HBO from 2003 to 2006. It stars Sacha Baron Cohen, who plays three different fake journalists, Ali G, Borat Sagdiyev, and Brüno Gehard. The show features the three journalists interviewing various figures and in various awkward situations. The Channel 4 and HBO runs together total 18 episodes, with the first 6 on BBC, for 3 6-episode seasons.

Ali G (whose "real" name is Alistair Leslie Graham) is the main character. He appears as a hip-hop artist, speaks in American hip-hop vernacular with a British accent, and is almost unbearably ignorant. He is the leader of the West Staines Massiv, a posse from "West" Staines, a suburb of London.

Ali G interviews people in the guise of a British talk show host interested in the media and politics — something he had previously done on Channel 4's late-night satirical comedy show The 11 O'Clock Show (which ran from 1998 to 2000 and also gave Ricky Gervais his first big break on TV). Some of his more impressive interviews include ones with Boutros Boutros-Ghali (the U.N. Secretary General at the time; he called him Boutros Boutros Boutros Ghali); politicians Newt Gingrich, Pat Buchanan, and James Baker (former U.S. Secretary of State, to whom he refers as "this geeza"); linguist Noam Chomsky (whom he refers to as "Norman Chompsky"); and astronaut Buzz Aldrin. In an interview with C. Everett Koop, the former U.S. surgeon general, Ali G refers to the "dong bone" as an example of a bone that grows.

Ali G did a movie, called Ali G Indahouse, which is completely scripted.

Borat is now the most well-known of the three alter-egos in Da Ali G Show. Borat is an anti-Semitic, misogynistic, but friendly Kazakhstani who is in America to learn about its culture. Borat's schtick is to make people uncomfortable by seeming backward and/or prejudiced or to get them to agree with his statements. Since he is played as a foreigner, people are usually hesitant to call him on any of his difficulties. Borat's comments are often anti-Semitic (although Baron Cohen is Jewish) and completely insensitive, as when he comments that Barbara Bush's last name is used in his language to mean pubic hair, while he's talking to a friend and admirer of Mrs. Bush.

The very successful movie Borat and its sequel are based on this character.

Brüno is a gay Austrian fashionista and journalist. Brüno's typical gags run in two forms: making people uncomfortable with his aggressive homosexuality and getting people in the fashion industry to go along with his hateful, ignorant and absurd statements. Some examples are interviewees saying that Osama bin Laden is cool, that people with bad fashion should be sent to concentration camps, and that fashion has saved more lives than doctors. There's a Brüno movie, too, in which Brüno's, er, member makes an appearance, along with Harrison Ford.

Ali G talks about if euthanasia is morally right. Or rather, the youth in Asia killing people.

Ali G talks about if euthanasia is morally right. Or rather, the youth in Asia killing people.