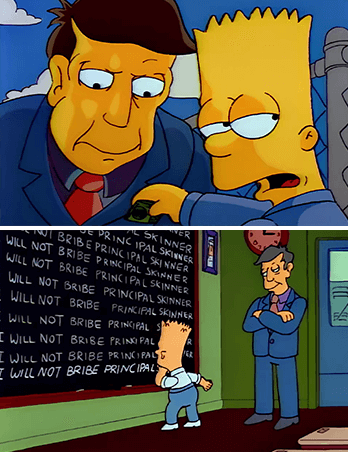 Gosh, what a sticky situation you're in! Oh, if only you could just buy your way out of this situation...

But before you try it, keep in mind that bribery is itself a serious offense, and if that official you're talking to falls on the lawful side of the Lawful/Chaotic divide, you may have just made things much, much worse for yourself. Basically, this is what happens when Mr. Screw the Rules, I Have Money! crashes headfirst into Mr. Screw the Money, I Have Rules!, and the results are usually not pretty.

If you're really unlucky, the individual who you're trying to bribe may not be easily dissuaded, and may in fact want to do horrible and illegal things to you anyway, regardless of the money offered. At the very least, the individual may just throw the money back in your face just to see the shock of the briber deal with a person who cannot be bought. Even if he takes the money, he may just be stringing you along to get evidence of the bribe (or to just screw you over by taking your money and giving you absolutely jack squat in return). Another thing to keep in mind: Anyone that you can bribe can also be bribed by someone else, so don't put too much trust in them.

An occasional inversion is one character suggesting that they would accept being bribed only for the person who would be giving the bribe to demonstrate he is having none of it.

See also Comically Small Bribe (where any backfire is a result of the inept choice of bribe (or better said, its amount) rather than the attempt itself) and Money Is Not Power (where the use of Money as a method of bribe in the face of a situation where it is useless paints the briber as Too Dumb to Live).