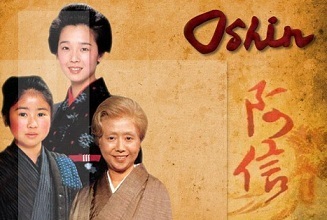 Oshin (おしん, Oshin) is a TV morning drama (asadora) aired in 1983 by NHK. It lasted 297 episodes, each one 15 minutes long. Its script writer, Sugako Hashida, said that the story's based on the real life of a woman named Katsu Wada, the mother of the Japanese entrepreneur Ryouhei Wada, founder of the Yaohan supermarket chain.

The series itself was this close to not be aired since it included a not very flattering view of Imperial Japan's classism, lack of free speech and increasing militarization through the first part of the 20th century. The head of NHK, however, gave it his seal of approval, which turned out to be a great idea since it was a hit in Japan and in many other countries, specially in the Middle East, some parts of Latin America, and Hawaii.note Many Americans' first exposure to the show might have been through a short excerpt aired on Primetime/Japan, a 1988 PBS special about Japanese TV, hosted by Harry Anderson of Night Court fame. The actresses Ayako Kobayashi, Yuuko Tanaka and Nobuko Otowa (little, teenage/adult and old Oshin, respectively) portrayed the main character.

Shin "Oshin" Tanemura is the youngest daughter of a farmer family, who has to start working at age 7 because her father Sakuzou can't make ends. She, however, can barely make it through her first work and almost dies in a snowy day, and only forging a sort-of Intergenerational Friendship with an ex-soldier saves her. Oshin's second work fares much better and she bonds with her employer's granddaughter, Kayo, plus gets something similar to an education and decides that someday, she will forge her own future. However, since her story is set in Imperial Japan plus she's a humble Country Mouse, it will NOT be an easy task... The story itself is marked as a 83-years old Oshin, now a very successful entrepreneur, explaining her humble origins to her teenage grandson Kei, while traveling across all the places in Japan where all the most important events in Oshin's life happened.

There's also an anime version, released theatrically by Sanrio in 1984, directed by Osamu Tezuka associate and Space Battleship Yamato veteran Eiichi Yamamoto, and adapting the early part of the story. Unlike the live-action series, the film bombed, and plans for further anime adaptations were scrapped. Ayako Kobayashi reprised the role of Oshin for the anime version.

Oshin includes many tropes, including these: