It's a Costume Party, I Swear! 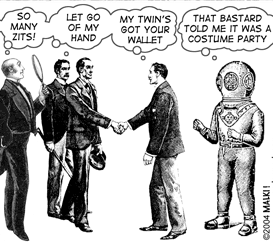 "I'm thinking 'Do I want to go?' Will it be everybody standing there in jeans and t-shirts, and I'm standing there as Little Bo Peep?"
— Sean Lock
Advertisement:

A favorite trick of the Alpha Bitch is to tell the Ordinary High-School Student that the High-School Dance will be a costume party and that everyone has to dress up as, say, a pirate. She is, of course, lying, but the heroine believes her due to Genre Blindness. Therefore, the heroine shows up at the dance dressed as a pirate (or, more likely, something impossibly elaborate and completely bizarre, such as a pirate ship) and thus look like a complete dweeb. Either Hilarity Ensues or the heroine discovers how to take this rather cruel Practical Joke and make the most of it, much to the Bitch's dismay. (In either case, the heroine will be so Genre Blind or so sweetly naive, that she fails to notice until she's at the center of the party and surrounded by people that she's the only one in costume.)

This can also be pulled by the heroine if it's directed at a character mean enough to "deserve it". However, an Unsympathetic Comedy Protagonist is allowed to pull it on someone not quite that mean.

This trope may result in An Aesop about trying to get In with the In Crowd. See also Underdressed for the Occasion, which can occasionally result from a similar prank. Compare Uninvited to the Party, where they're so uncool they're not invited, period. Not generally related to For Halloween, I Am Going as Myself and tropes related to that.