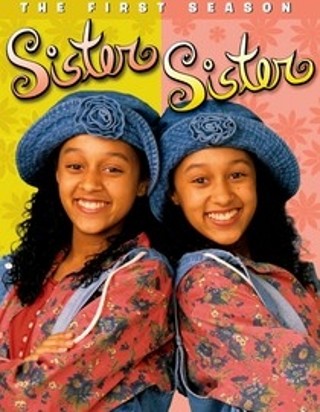 "That girl has my face!"
"I got my own mind!
I do my own style in my own time!"
Advertisement:

The most famous show to feature a set of twins not named Mary-Kate and Ashley (at least, until The Suite Life of Zack & Cody came along), Sister, Sister features Tia and Tamera Mowry as Tia Landry and Tamera Campbell, identical twins separated at birth and reunited 14 years later in a Detroit shopping mall. Their adoptive parents, aspiring fashion designer Lisa Landry (Jackeè of 227 fame) and wealthy entrepreneur Ray Campbell (Tim Reid, Venus Flytrap from WKRP), decide that for the good of the kids they should move in together - quickly becoming a close family unit.

The girls themselves are, of course, two sides of the same coin: Tia is a studious girl, somewhat shy and bookish. Tamera is a wild and crazy girl, prone to wild displays of emotion. Each one is quite the opposite of her adoptive parent: Tia under wacky Lisa, and Tamera under prudish Ray.

A frequent Drop-In Character was the family's next-door neighbor Roger Evans (actor/R&B singer Marques Houston), who of course had a mad crush on both girls, and wasn't afraid to show it. He was frequently told, "Go home, Roger!" whenever someone was annoyed with him (which was practically all the time).

For the first four seasons, the girls experienced wacky hijinks and twin switches galore. Starting in the fifth season, the show was re-tooled to separate the girls more: Each got her own style, Tia stopped wearing a fake mole to look exactly identical to Tamera, etc. The girls also got boyfriends that season: Tia had Tyreke (RonReaco Lee), while Tamera took Jordan (Deon Richmond). Both young men served as replacements of sorts for Roger, who had begun to appear less often and was retired from the show altogether at the end of the season. Essentially by this point in the show, the girls had grown up and the situations they got into followed suit. Even the theme song reflected that with a more relaxed R&B sound, compared to the hyperactive New Jack Swing tune heard in the first four seasons.

The show ran for six seasons, the first two on ABC, the rest on The WB. The show has lived on in perpetual reruns on networks such as ABC Family, The Hub, BET, and most notably, Disney Channel where it ran from 2002 until 2007. The Disney reruns helped give the show a huge boost in popularity, becoming a favorite among a new generation of kids and played a role in greenlighting the channel's original movie T*Witches and its sequel.

As of October 5th, 2020, the show began streaming on Netflix where, once again, it's been discovered and adored by another new generation.

Now that everybody knows all the tropes...
I ain't ever gonna let...you...go!
Sister, sister!

Statler: Gee, why should everybody know that the girls reunited at a shopping mall?
Waldorf: I don't know? Maybe their reunion got the top story on Nightline!
Both: Do-ho-ho-ho-ho-ho-hoh!

The opening credits for Season 1 of "Sister Sister" is a stop-motion/animated sequence, designed by "TwinArt".

The opening credits for Season 1 of "Sister Sister" is a stop-motion/animated sequence, designed by "TwinArt".