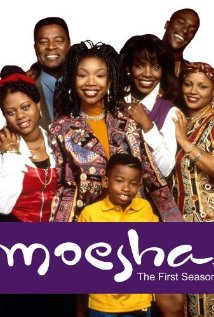 Moesha is an American sitcom that ran on UPN from January 23, 1996 through May 14, 2001, starring R&B singer Brandy Norwood. The show focuses on the life of a middle-class African American family through the eyes of a typical girl.

At the series' start, Moesha's widowed father, Frank, has, to Moesha's dismay, just married Dee, the vice principal at Moesha's school. Other members of the Mitchell household included Moesha's younger brother Myles, and later on her cousin Dorian, who was later revealed to actually be her paternal half-brother, the result of infidelity on Frank's part during his first marriage. Moesha's friends included Niecy, Hakeem, Andell, owner of the neighborhood hangout, the Den, and Kim, who later received her own show.

After six seasons, the show was cancelled, ending the series in a cliffhanger. Brandy confirmed in late 2019 and again in 2020 that a reboot is in the discussions stage.

Shares a universe with Girlfriends and The Game (2006).

The show provided examples of: