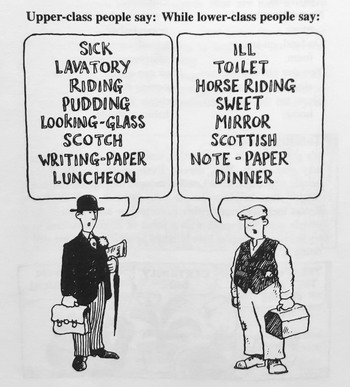 Eliza: The rine in Spine sties minely on the pline.
Henry: The rain in Spain stays mainly on the plain.
Eliza: Di'n't I sye that?
Henry: No, Eliza, you didn't "sye" that. You didn't even "say" that. Now every night before you get into bed, where you used to say your prayers, I want you to say "The rain in Spain stays mainly in the plain" fifty times. You'll learn to get much further with the Lord if you learn not to offend His ears.
— My Fair Lady
Advertisement:

In any work with a cast that includes both slobs and snobs, one of the quickest ways to distinguish one from the other is to assign each group a certain accent or dialect: one for the slobs that's rougher and more regionally specific, and one for the snobs that's more carefully pronounced and indicative of the economic and social capital of their country. In a drama, especially a Period Piece, this trope can be played for authenticity to the setting. In a comedy, it can be Played for Laughs in order to set up a character as an Upper-Class Twit or a Lower-Class Lout.

A socioeconomic sub-trope of Separated by a Common Language. Often reinforced by Accent Adaptation, when the creator replaces the original work's Rich Language/Poor Language pattern with a corresponding pattern that viewers in their own country would understand. When separate languages or dialects are involved, it's Noble Tongue.

Depending on the setting in question, this trope has several geographic variants: