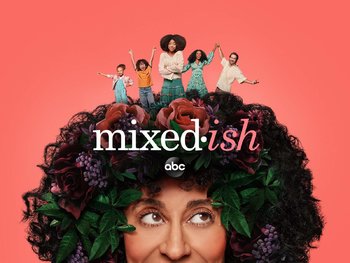 In the mix.
Advertisement:

mixed•ish is a 2019 sitcom Spin-Off from black•ish (the second spin-off, right after grown•ish). The series is a prequel, focusing character Rainbow's (Arica Himmel, with Tracee Ellis Ross narrating as adult Rainbow) formative years in The '80s after she and her family get chased off a commune and try to assimilate back into regular society as a mixed-race family. Her father Paul (Mark-Paul Gosselaar) stays at home trying to adjust to his new reality, while her mother Alicia (Tika Sumpter) navigates the work place. Her younger brother Johan (Ethan William Childress) and little sister Santamonica (Mykal-Michelle Harris) join her at a socially-segregated school. Her grandfather Harrison Jackson III (Gary Cole) and aunt Denise (Christina Anthony) occasionally drop in.

The show was canceled in early 2021, after two seasons.

Has a Character Sheet which Needs More Love.