Series / My Wife and Kids 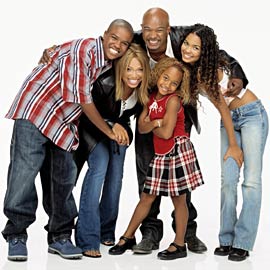 Dom Com that aired on ABC from 2001 to 2005. The show is about Michael Kyle (Damon Wayans, in what is arguably his most famous work worldwide) and, well... his wife and kids: Jay (Tisha Campbellnote credited as Tisha Campbell-Martin), Junior (George O. Gore II), Claire (Jazz Raycolenote Season 1 only/Jennifer Nicole Freeman) and Kady (Parker McKenna Posey).

Also known for Noah Gray-Cabey's first big role (the Child Prodigy Franklin) and for the first appearance of Terry Crews in a big work after his breakout role as Latrell Spencer in White Chicks.