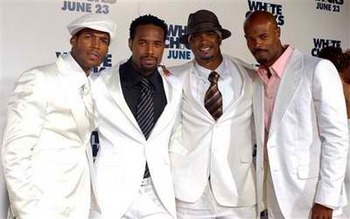 Marlon, Shawn, Damon, and Keenen Ivory
There I is, Major Payne like Damon Wayans
Low Down Dirty, even, like his brother Keenen
— The Notorious B.I.G., "One More Chance"
Advertisement:

The Wayans family is a very large family of actors, writers, directors, and producers, who together have produced and starred in many of the most successful African-American comedic movies (I'm Gonna Git You Sucka, Scary Movie) and TV series (In Living Color!, My Wife and Kids) of the past thirty years. Members of the family include Keenen Ivory Wayans (born June 8, 1958), Damon Wayans (born September 4, 1960), Shawn Wayans (born January 19, 1971), Marlon Wayans (born July 23, 1972), and Damon Wayans Jr. (born November 18, 1982). They often operate as a Family Business Production Posse, wearing several different hats: actor, director, writer, and producer.